Just six months after the debut of its first mobile gaming-specific device, the Black Shark, Xiaomi has revealed an updated version with the Black Shark Helo that features a whopping 10GB of RAM. Underneath its rugged exterior, the Black Shark Helo gets a Qualcomm Snapdragon 845 processor that’s mated with either 6GB or 8Gb of RAM while the internal storage remains the same as with the Black Shark at 128GB. If that’s not enough, there’s an even more extreme version that packs a massive 10GB of RAM and a generous 256GB of internal storage.

For taking pictures, the Black Shark Helo has a similar set of cameras as the original Black Shark. Which means it’s a dual-rear camera setup that comprises of a 12MP primary sensor and a 20MP secondary shooter, both with f/1.75 aperture lens and LED flash. The front facing camera is a 20MP unit with f/2.2 lens. 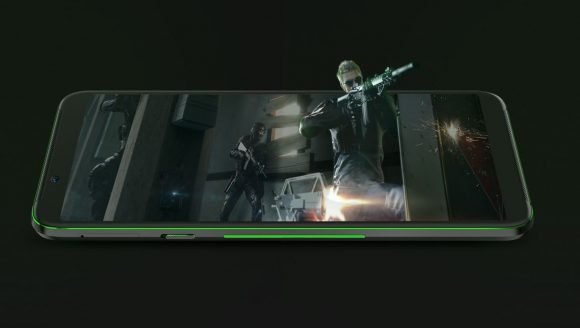 Powering the device is a 4,000mAh battery that supports Quick Charge 3.0 via a USB-C. Out of the box, the Black Shark Helo runs on Android 8.1 Oreo with Xiaomi’s MIUI 10 skin. For a more immersive audio experience, the Helo features front-firing stereo speakers that are located in the cutouts on the top and bottom of the handset. Similar to its predecessor, there’s no headphone jack found on the device which is an odd decision considering that the Black Shark Helo is a gaming device.

The 6GB and 8GB variants will come with a physical controller extension called the Black Shark Biplane Handle only for the left side, while the 10GB model will come with both left and right handles.

For comparison, the ASUS ROG gaming smartphone comes with a 6-inch Full HD+ OLED display, Snapdragon 845 processor paired with 8GB of RAM and 128GB or 512GB of storage. What makes the ROG phone stand out is the outstanding feature set that’s never seen on a smartphone before this like a  built-in nickel-plated cooler, a pair of capacitive shoulder buttons and two USB-C ports – one at the bottom of the device where you would normally expect a USB port to be located and the other is on the side of the device so that you can continue to charge the phone while you’re gaming and not have a cable obstructive your hand. ASUS has also made the sensible decision to have a 3.5mm headphone jack on the ROG Phone.

The only issue that I have with the ROG Phone is the price. At RM3,499 for the 128GB variant and RM3,999 for the 512GB model, the ROG Phones are expensive when you compare to the Black Shark Helo or if you’re really into portable gaming, the Nintendo Switch is a cheaper and arguably better option.

So would you rather go for the Black Shark Helo or the ROG phone? Let us know in the comments down below.