The Huawei Mate 20 is launching very soon and it could hit the Malaysian market as early as end of next month. This will be their most powerful device yet with a new Kirin 980 chip and it will feature a triple camera setup similar to its P20 Pro.

Ahead of its actual announcement, a purported Mate 20 was caught in the wild at the show floors of IFA 2018. This more or less confirms what we know so far about the device. 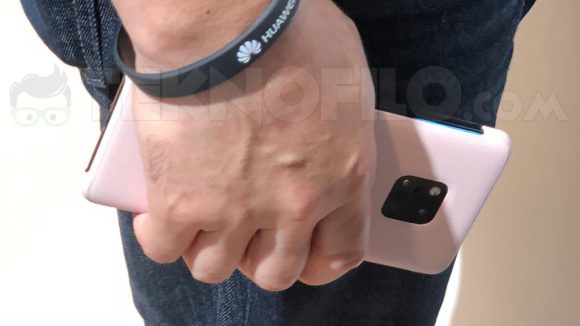 As seen on the earlier render, the camera module at the rear uses a 2×2 layout consisting of 3 cameras and an LED flash. It’s placed right smack in the middle unlike the P20 Pro where it’s placed vertically in a single row to mimic a handheld camera. The smartphone is in a case so we can’t really tell what design or material it uses but we reckon it should be glass like its current flagships. Since there’s no extra cut out at the rear, the fingerprint sensor is likely placed in front and it could be an in-display unit.

At the bottom, the USB-C port is visible and over at the top, it appears to come with a 3.5mm headphone jack, a feature that’s missing on their latest P20 series flagship. In terms of specs, the Mate 20 is expected to come with a 6.3” AMOLED display that has a tiny notch at the top. Powering the device is a larger 4,200mAh battery and apparently Huawei will include wireless charging. The Huawei Mate 20 will be announced in London on 16 October 2018. What do you think of the design? Let us know in the comments below