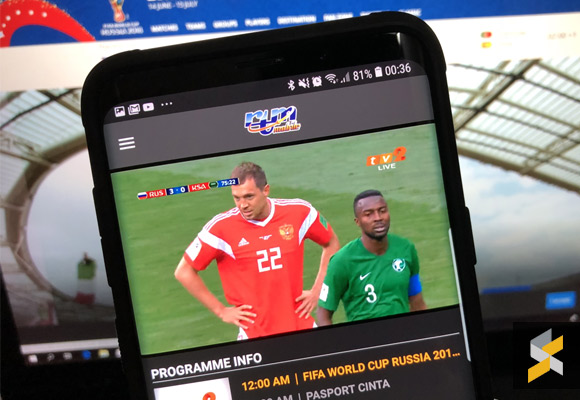 The 2018 FIFA World Cup is happening right now in Russia. While Astro has the full rights to broadcast all 64 matches on pay TV, you can watch it for free on RTM channels. If you’re not near a TV, you can also watch the World Cup live on your smartphone without any paid subscription. Apart from terrestrial broadcast, RTM is also streaming the World Cup live on its mobile app. You can download RTM Mobile app on the AppStore and Google Play Store.

The stream quality is not bad and it can go up to HD 720p resolution. There’s no registration required and you can tune in to TV1 or TV2 immediately to start watching.

Alternatively, you can watch the match on your home TV. If you have a Google Chromecast or Android TV box, here’s how you can cast the World Cup for free.

RTM will broadcast 41 out of 64 matches for free. 28 matches will be shown live while 13 matches will be delayed. The 2018 World Cup broadcast on RTM is sponsored by Maxis and AirAsia. Maxis is the platinum sponsor with a contribution of RM18 million while AirAsia is the Gold sponsor with RM12 million in sponsorship. Take note that Unifi TV subscribers will not be able to watch the World Cup matches via their set-top boxes due to broadcast rights.

If you’re a Maxis or Hotlink subscriber, you can watch all 64 World Cup matches on Astro GO for only RM1 per match. You’ll need to purchase the RM1 pass from the MyMaxis or Hotlink RED app and it comes with free streaming data. Just take note that you must purchase the pass at least 3 hours before the match begins.

Even if you’re not an Astro customer, you can also watch 29 live and 12 delayed matches on the Astro Go app for free via the Astro Arena Channel. The app is available on the App Store and Google Play.

Below is the World Cup schedule for Group Stages from Star2.

UPDATE: Below is the schedule for the remaining World Cup matches from Star2.