Just recently, both Celcom and Unifi have introduced their LTE-based home wireless broadband plans. They are a hassle-free solution for those who can’t get fibre connectivity for the home. Despite Celcom offering up to 1TB of data for video streaming, there are those who prefer unlimited quota without costing a bomb.

If you’re looking for an alternative, Yes is now offering unlimited LTE data that you can enjoy from as low as RM99. A couple of Yes outlets in KL are promoting a new Yes 4G Home 2 plan that gives you unlimited data together with a Yes Zoom 4G LTE router at RM109/month. The only catch is that speeds are capped up to 2Mbps, which is basically more of a Streamyx alternative. With this plan, you won’t have to worry about running out of data but just don’t expect to stream 1080p videos without buffering. 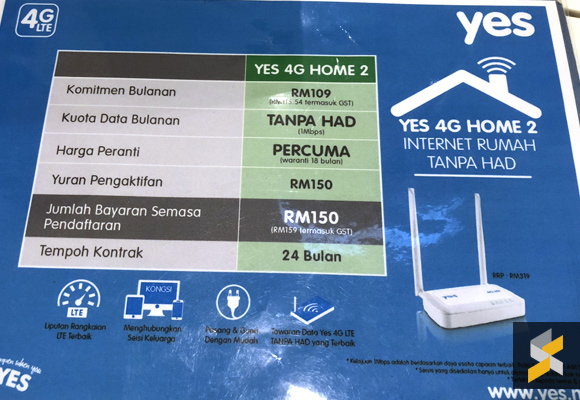 The unlimited home plan which is also known at Yes FIZ 2 at some outlets has an activation fee of RM150 but we are told that it’s reduced to RM100 as part of their ongoing promotion. The Yes Zoom 4G LTE router is a simple plug and play device and it can support up to 32 devices simultaneously on WiFi. Like most broadband plans, it’s tied to a 24-month contract. Over in Kuantan, the same unlimited plan is offered cheaper with a subscription fee of RM99/month.

We can’t seem to find this plan on their website so this could be a limited-time promo offered at selected areas. As a comparison, they currently offer 35GB data at RM98/month, 50GB at RM128/month and 80GB for RM168/month. Unlike the unlimited plan, speeds are uncapped on their normal home wireless broadband offering.

What do you think of this new plan? If you can’t get fibre broadband, would you go for this unlimited 2Mbps plan or something else? Let us know in the comments below.