With the amount of Huawei P20 leaks we are seeing lately, we wonder if there are any surprises left for the launch on 27 March. If the recent leaked hands-on photos and video isn’t enough, here are the full details including the complete hardware specs thanks to a product listing on a Polish website. The P20 Lite is the most affordable of the lot and it will feature a FullView 2.0 screen of 5.84-inches. The aspect ratio is different at 19:9 and as a result, the screen pushes a taller FullHD+ resolution of 2280 x 1080 pixels. Yes, it does have a notch at the top. Under the hood, it has the similar hardware as the Huawei nova 2i. It runs on a Kirin 659 Octa-Core processor with 4GB of RAM and it has 64GB of internal storage. If that’s not enough, you can expand up to 256GB of storage with a microSD card. In the imaging department, the rear gets a 16MP main camera plus a 2MP shooter for bokeh effects. In front, it gets a 16MP selfie camera which supports portrait mode with added studio light effects. Like most new smartphones, it also supports face unlock which claims to be simple, fast and safe. The P20 Lite also has NFC which will work for mobile payments and it also comes with a 3,000mAh battery. It supports 9V 2A fast charging via a micro USB port and also retained is a 3.5mm headphone jack. Out of the box, it runs on Android 8.0 Oreo with EMUI 8.0 skin on top. 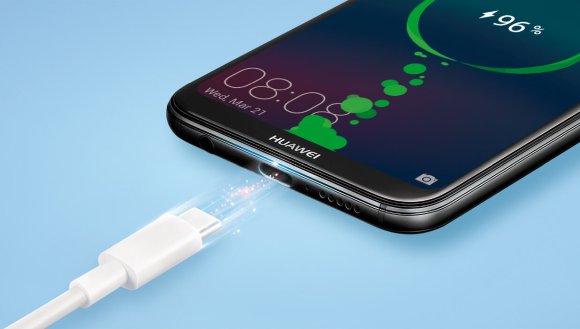