As if the extra large notch on the Google Pixel 3XL is not already a bad thing, a weird software bug is causing a number of Pixel 3XL phones to sprout a second equally unsightly notch.  Some users who experienced the problem are sharing their experience on social media and the second display notch looks as weird as it sounds.

So my Pixel randomly grew another notch today. 😂 https://t.co/c6Pff9MVmW pic.twitter.com/ugjfLmCkDZ

Apparently, the problem occurs when the screen’s orientation is switched from landscape to portrait. Luckily, the problem can be fixed simply by restarting the phone or my tweaking some basic developer settings. The problem itself does not critically affect the Pixel 3XL nor does performance suffer but just look at it, it looks ridiculous!

Does anyone have this issue on their Pixel 3XL where a outline of another notch pops up on the top right side?
Placed a white background to show it@madebygoogle @Google @AndroidAuth @AndroidPolice @Android @phonearena @gsmarena_com @thisistechtoday @UnboxTherapy pic.twitter.com/byzbgn1P7N

Google is aware of the issue and is apparently working on a software update to fix the bug, a Google spokesperson told Business Insider that a fix is “coming soon” for the bug.

The notch on the Pixel 3XL is a hot topic among owners and enthusiasts. For one, the Pixel 3XL has one to the biggest notches ever seen a smartphone. If you have one, there’s a way to hide the notch somewhat with a notch toggle hidden in the device’s developers settings. 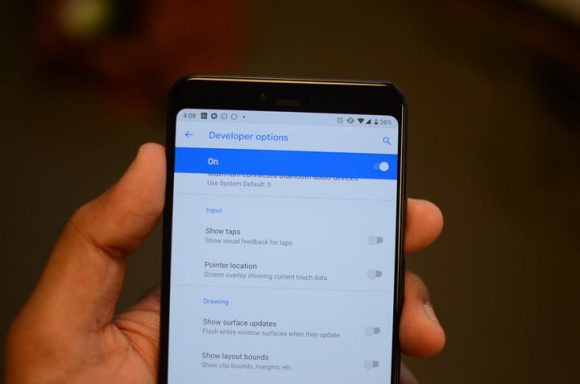 Here’s how you hide the notch on the Google Pixel 3XL:

Once that is enabled, the screen area flanking the notch will be disabled effectively hiding the notch. That means you will be losing some display space at the top but that’s the price to pay for having a ginormous notch.