It wasn’t that long ago when we had a conversation in the office about how smartphone makers always forced us to choose between having a large battery, or having really quick fast-charging. Even at the flagship-level, this choice was almost always being forced on us. And that wasn’t cool because if you’re going to be paying top dollar for a smartphone, it should have everything, right?

Well, it looks like Huawei thinks so too, because their latest flagship smartphone is the most convincing case in point I’ve seen, of a world where we don’t have to make that tough choice. A world where you can finally have your cake and eat it too. Let it be known that I do acknowledge the fact that fast-charging has been a staple feature on flagship smartphones for a while now, even phones with relatively big batteries (3,500 mAh+). Qualcomm‘s Quick Charge and Samsung‘s Adaptive Fast Charging are two good examples of these forms of fast-charging, but they both work around the confines of a maximum output of about 18W (9V2A)

Then, you have OPPO and OnePlus, with their own form of fast charging. OPPO called it VOOC Flash Charging while OnePlus called theirs Dash Charging (or at least, they did), but we’ve always suspected that they were the same standards. Both operated at 5V and 4A, and this combination provides a power output of about 20W.

But the thing is, although these smartphones had really fast charging, most of them suffered from the big issue of having a small battery. The OnePlus 3 famously only packed a 3,000 mAh cell, and Samsung’s brave attempt at putting a sizable battery in their phone ended up in smoke. Comparatively, Huawei were a little late to the party. While they generally had pretty sizable batteries, they only started shipping fast-charging bricks with the company’s 2016 flagship, the P9 Plus, and even then it was only your standard 18W (9V2A) fast-charging brick. It wasn’t until the Mate 9 that we saw Huawei introduce their SuperCharge technology which also featured a low voltage, high amperage standard at 5V4.5A. 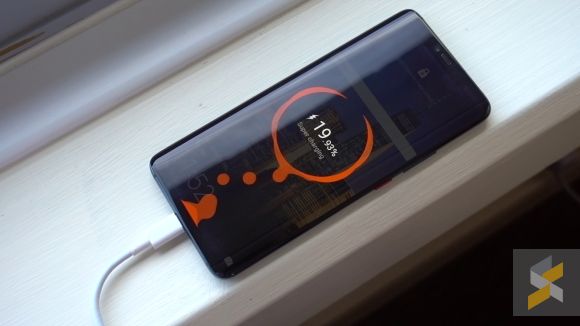 Now, Huawei’s pulling ahead of its competition. Not only do they have a new super-fast 40W fast-charging standard, they’ve also got the largest batteries among the top flagship smartphones. The Mate 20 Pro, for example, is packing a massive 4,200 mAh cell in a body that isn’t much bulkier than its competition. And with their new SuperCharge 2.0, you can charge that battery to 70% in just 30 minutes. But Huawei weren’t done yet, they also upped the ante for wireless charging thanks to their new 15W wireless charger. For comparison, their competitors and Apple and Samsung only have 7.5W and 9W chargers respectively. In fact, Huawei says their wireless charger is even faster than the iPhone XS Max’s standard wired charger. Granted, Apple only bundles a sad 5V1A brick with their phones, but the point remains that Huawei’s wireless charging is really fast by today’s standards.

Oh, and did I mention the fact that the Mate 20 Pro can also wirelessly charge OTHER phones that support the Qi Wireless charging standard? No? Well, it does. That means the smartphone in your hand is also a wireless powerbank. Nuts. I may not be the biggest Huawei fan, and I certainly have many reservations about the Mate 20 line of smartphones, but I have to give credit where credit is due — Huawei really knocked it out of the park here. On paper, it looks like the smartphone to beat when it comes to battery performance, and the new gold standard, while their competition are still faffing about trying to solve one problem or the other. Samsung, for example, haven’t updated their 9V2A Adaptive Fast Charging in years. And, while OPPO do have the highest output — 50W (10V5A) — with SuperVOOC on the Find X Lamborghini edition, that device only has a 3,400 mAh cell. Of course, I will admit that there are other factors that impact battery performance. Capacity definitely isn’t the be-all and end-all of a phone’s battery life. Software and OS optimisation plays a huge role in keeping your phone running for longer on a single charge and, in my experience, that’s something Huawei doesn’t have the best history with. But, the technical feat of being able to cram such a big battery into such a svelte body, while also giving it super fast fast-charging that is also safe, is definitely an impressive one.

So kudos, Huawei, you deserve this.