In addition to their brand new smartphones, Huawei Malaysia will also be bringing in their MacBook competitor, the Huawei MateBook X Pro and MateBook D. 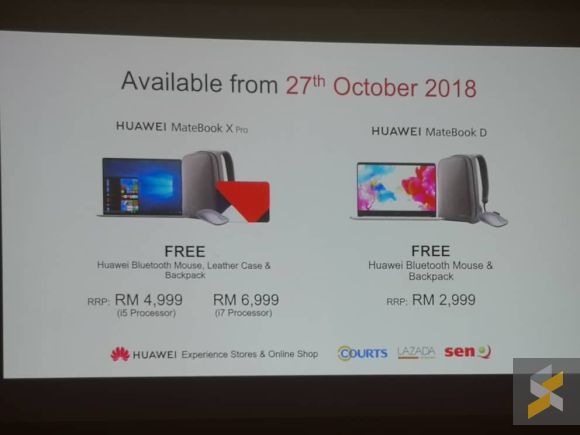 Huawei’s MateBook X Pro is the most capable laptop Huawei has produced. It features a 13.9-inch display up front with crazy slim bezels for a 91% screen-to-body ratio. It pushes a resolution of 3000×2000 pixels for a dense 260 pixels per inch. However, its claim to fame is the laptop’s recessed front camera that will be hidden away when not in use — giving you all the privacy you need, at the cost of it looking up your nose. If you’re on a tighter budget, the MateBook D is priced at a lower RM2,999 for the device with an Intel Core i5-8250U processor, and every purchase will also include a Huawei Bluetooth Mouse and a backpack for free. This particular laptop has a lower resolution 1920×1080 pixel Full HD display, but it still has relatively slim side bezels. You can also pre-0rder the MateBook from the 19th to the 22nd of October 2018 and receive a Microsoft Office 365 subscription worth RM359/year for free while stocks last. Pre-order at 3ex, Huawei Online Shop, Lazada or visit SenQ stores for bookings. Additionally, the MateBooks will also be on sale at the special sale event taking place in Queensbay Mall, Penang, Pavilion, KL, and Aeon Bandar Dato Onn, Johor Bahru. If you’re among the first 30 customers to buy a MateBook at Pavilion KL, or among the first 10 at the other two locations, you will receive a pair of wired Huawei ANC in-ear headphones for free.

For more details on the specs of the Huawei MateBook X Pro, check out this post.