Large display, great specs and a sleek build. These are the some of the things that go into the perfect smartphone. From the sound of it, these are also features of a very pricey device…unless you are talking about the honor 8X. That’s because this device seems to have all of that but remain below RM1,000. 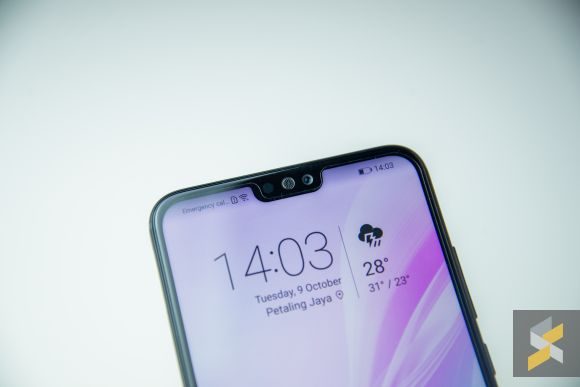 The honor 8X is a mid-range device that carries a whopping 6.5-inch Full HD+ display (2340×1080 pixels) that houses the infamous notch at the top and it has an aspect ratio of 19.5:9. However, the rest of the bezels are really slim, that is why it has a 91% screen to body ratio.

Despite its large screen, the device is easy to grip and comfortable to hold in one hand. However, navigating the whole screen would still require both hands. But so far, I like the quality of the display as the images and text are pretty sharp while the colours are bright and vibrant. There’s also no visible colour shift when you tilt the phone at extreme angles. These are actually good indications for a good viewing experience when it comes to watching videos and playing games. At the back of the device, you will notice that the device follows a similar aesthetic as we’ve seen on other honor devices. The honor 8X features a metal frame and it is covered by a 2.5D aurora glass back with something honor likes to call a grating effect. You hold the device in landscape mode, you can see a distinctive band that runs across the full length of the device as pictured above. However, the panel is a fingerprint magnet and you can easily smudge it within a few minutes.

Besides that, you will also find a fingerprint reader that sits at the back along with the vertically aligned dual camera at the top left. 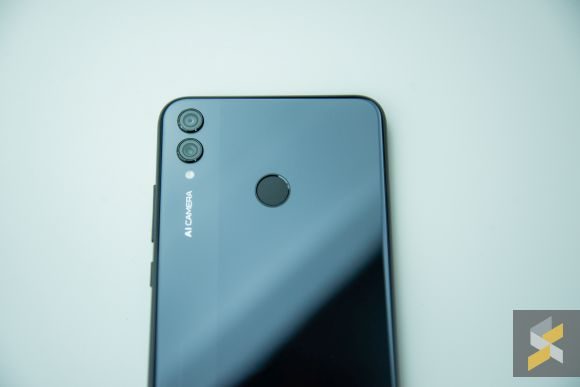 Speaking of dual-cameras, the 8X has a 20MP sensor paired with a 2MP shooter that enables depth-of-field effects. Just like many other smartphone cameras out there, the 8X does not lack AI scene recognition technology, where it automatically analyses a scene and gives you the best shooting mode based on your subject. However, you might not like how the pictures turn out. Sometimes, the pictures taken turns out to be over-saturated, but if you want a natural looking photo, the AI mode can always be turned off.

The 8X’s rear camera also supports AI assisted Night mode, similar to the ones we saw on the Huawei P20 Pro. But for what I’ve seen so far, the pictures taken turn out to be super grainy and it is not as great as the Huawei P20 Pro. For selfies, the handset gets a 16MP selfie shooter alongside AI Portrait mode and some beautifying features. The device is powered by Huawei’s own Kirin 710 chipset, which is a substantial upgrade from the Kirin 659 processor on its predecessor. Other than that, it comes with 4GB of RAM and mated with a generous 128GB of internal storage. If that’s not enough, you can always expand it via a microSD card. One thing that I like about this device is that it comes with a triple card slot, where it has a dedicated slot for a microSD card. Out of the box, it runs on an Android 8.1 Oreo with honor’s EMUI 8.2 skin on top. Keeping the device running is a 3,750mAh battery that still charges via a micro USB port. Unfortunately, there’s no fast-charging onboard, which is quite a bummer considering one of its rivals, the Xiaomi Mi A2 has quick charge support. With respect to the performance, the device also supports GPU Turbo technology, just like the one we saw on the company’s gaming-centric device, the honor Play. The feature claims to boost graphics processing for gaming while improving on power efficiency. But since I’ve only spent a little amount of time with this device, I could not give my full judgment on how well this feature works.

The honor 8X is priced at RM949, which is pretty affordable for a mid-range smartphone. It is a compelling choice for those who want a reasonably priced smartphone without sacrificing on build and performance. However, it isn’t perfect and one of the issues I’ve noticed is that the device does not support 5GHz WiFi which could be a deal breaker for some people.

Overall, it is a pretty huge upgrade from its predecessor, the honor 7X. Last year’s model was priced higher at RM1,099 but it has a smaller 5.93-inch display, 3,340mAh battery and only 64GB of internal storage.

So what are your thoughts on the honor 8X? Let us know in the comments down below.

For more information on the availability of this device, you can check out our announcement post here.