The latest iPhone models are just getting more expensive. If we refer to Apple Singapore’s pricing, the iPhone XS is priced from RM4,974 for the base model with 64GB and it goes up to RM7,086 for the 512GB version of the iPhone XS Max. If you need a brand new iPhone but not willing to spend more than RM4,000, Apple has also announced a cheaper version that’s called the iPhone XR. This looks like a direct replacement of the smaller iPhone 8. While it’s currently the cheapest new iPhone of the lot, the iPhone XR gets a large 6.1″ edge to edge display that uses IPS instead of OLED. Apple is calling it a Liquid Retina HD display and they say it’s the most advanced LCD in the industry. Unlike its more expensive models, it only pushes a resolution of 1792×828 pixels, which is below Full HD.

Similar to the iPhone X, the XR gets a notch which also houses the same advance sensors which enable Face ID authentication. Because of its bigger display size, the pixel density is lower at 326ppi which is on par with the regular iPhone 8. Unfortunately, there’s no 3D Touch but Apple is replacing it with Haptic Touch that claims to offer a similar feedback as their MacBook Pro trackpads. Instead of using stainless steel like the iPhone X and XS, the XR uses 7000 series aluminium for its metal frame. While it appears that Apple is cutting corners with the display, the iPhone XR is packing similar top notch hardware as the iPhone XS. It is also running on the new 7nm A12 Bionic Chip and it retains the same 12MP f/1.8 main camera that’s assisted with OIS. The camera has Smart HDR, 4K video recording up to 60fps and stereo audio recording.

The only thing that’s missing is a secondary telephoto lens but it could still take Portrait shots with depth control. Portrait Lighting is also supported but it’s limited to just 3 effects – Natural, Studio and Contour. The front camera is the same as the iPhone XS with a 7MP f/2.2 TrueDepth camera that also supports Portrait Mode and Animoji.

SEE ALSO:  Is Garmin more profitable than Apple in 2020? To differentiate itself from the iPhone XS series, the XR gets the iPhone 5C treatment with a choice of six colours, namely Blue, White, Black, Yellow, Coral and Red. Despite being a “budget” phone, the iPhone XR also gets dust and water resistance rated at IP67. This means it can be submerged up to 1 metre for a duration of up to 30 minutes. There’s also Dual-SIM support but for those outside of China would need to use an e-SIM for the secondary connection. 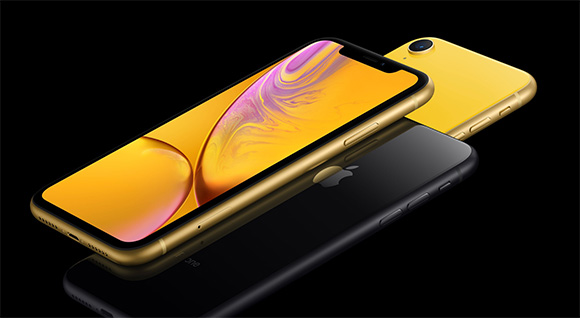 In Singapore, the iPhone XR is priced as follows:

Using the direct price conversion, the iPhone XR pricing is quite similar to the iPhone 8 at the time of launch. The iPhone XR will be released next month with pre-orders starting on 19 October 2018 in first wave countries. If you’re using a 4.7-inch iPhone 7 or older, would you consider getting the iPhone XR? Let us know in the comments below.