Apart from Samsung and Apple, Google will be unveiling its new Pixel 3 flagship smartphones very soon. The launch event is expected to take place in October but now we get a clear look of the Pixel 3 XL thanks to an unboxing video by @Luchkov. Not only we get to see its new notched display, the video also reveals what you’ll get in the box.

In terms of design, it gets a taller display but there’s a rather thick chin at the bottom which houses one if its front-facing stereo speakers. The bezels at the top end of the phone are thinner but you get a notch that has an earpiece and front-facing camera.

Interestingly, it comes with a set of USB-C headphones and this wasn’t included on the Pixel 2 XL. There’s also a USB-C to 3.5mm adapter, a USB-C to USB-C cable and a USB-C to USB-A adapter. A PD (Power Delivery) charging brick is bundled as well. In terms of specs, the Pixel 3 XL gets a Quad HD+ display and it runs on a top of the line Snapdragon 845 processor with 4GB of RAM. While most smartphone makers are going for 2 or 3 cameras, the Pixel 3 XL still comes with a single rear shooter. Since there’s a full retail box, it looks like the Pixel 3 XL is ready to go to market very soon. It isn’t clear if Google will release this in Malaysia so you’ll probably need to turn to grey importers if you’re interested. Apart from the Google Pixel 3 XL, there is also a smaller Pixel 3. Would you consider buying a Pixel device if it’s available in Malaysia? Let us know in the comments below. 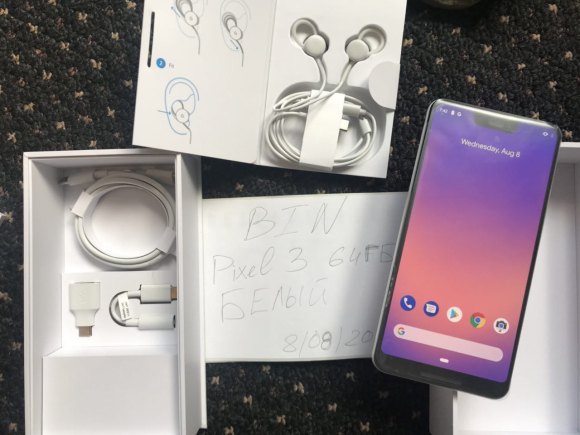