Samsung isn’t giving up on tablets just yet. After more than a year since they introduced the Galaxy Tab S3, the Korean brand has just announced their new flagship tablet which provides greater productivity with Samsung DeX support. Unlike its Galaxy smartphones, the new Tab S4 lets you connect to the big screen without requiring a Dex Station. Obviously aiming for the iPad Pro, the Samsung Galaxy Tab S4 comes with a 10.5″ WQXGA display. It pushes 2560×1600 resolution in a 16:10 aspect ratio on a Super AMOLED panel. Although the screen is bigger than the 9.7″ Galaxy Tab S3, the dimensions are quite similar as they have made the bezels thinner. Under the hood, it runs on a Snapdragon 835 processor that’s mated to 4GB of RAM. It comes with either 64GB or 256GB of storage which is still expandable via microSD up to 400GB. For imaging, it features a rear 13MP main camera that supports 4K video recording while the front comes with an 8MP shooter.

Included is an S Pen that comes with a 0.7mm tip and it has 4,096 levels of pressure sensitivity. The stylus offers Galaxy Note-like features including screen off memo, live messages and hover-over translations. 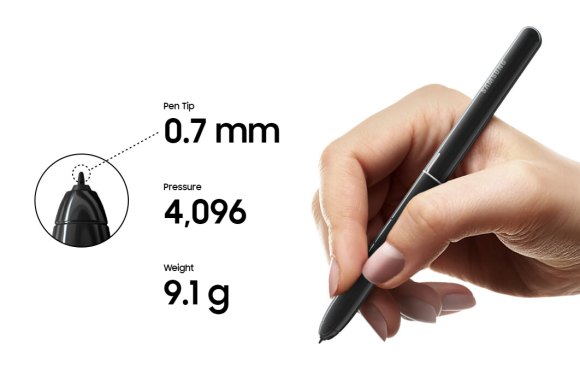 When paired with a keyboard and mouse, you can turn the Galaxy Tab S4 into a PC experience by switching to DeX mode. This will bring up a taskbar and it enables multi-window capabilities as well as support for drag & drop gestures.

For a big screen experience, you can now extend your workspace via a compatible USB-C to HDMI adapter without requiring a Samsung DeX Station or DeX pad. This is quite similar to Huawei’s EasyProjector solution. The Samsung DeX mode can also turn the Galaxy Tab S4 into a digitizer and you can watch your work in real time on a secondary monitor. If you don’t have a physical keyboard or mouse, you can also use the tablet as a touchpad and virtual keyboard.

Powering the Tab S4 is a large 7,300mAh battery that’s rated to last up to 16 hours of video playback on a single charge. It also supports USB-C fast charging and it can do a full charge in 200 minutes.

There’s no fingerprint sensor on the Galaxy Tab S4. Instead, it now gets iris scanning along with facial recognition for a more convenient way of unlocking. For an immersive multimedia playback experience, the tablet comes with quad speakers that are tuned by AKG. There’s also Dolby Atmos enhancement for 3D surround sound. The Samsung Galaxy Tab S4 comes in either Black and Grey colour options and it’s available in both WiFi-only and 4G LTE versions. In the US, the Galaxy Tab S4 64GB WiFi is priced at US$649.99 (about RM2,647) while the 256GB WiFi version is priced at US$749.99 (about RM3,054).