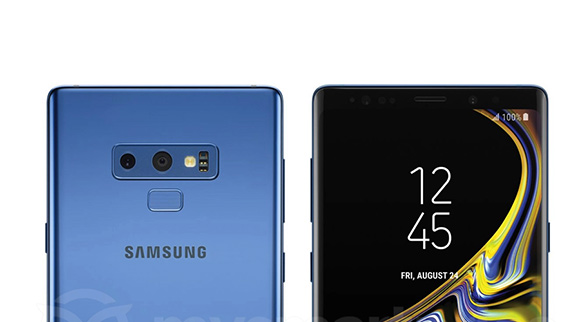 The Galaxy Note9 is launching in two week’s time and this is Samsung’s latest flagship with an updated S Pen. The design of the device has been revealed in several leaked live photos and now we have a clear look at two of its colour options. Similar to the Galaxy Note7 and the Galaxy S9/S9+, the upcoming Galaxy Note9 appears to come in Coral Blue which is of a lighter shade than the Note8 version. Unlike the Galaxy Note8 that has a black camera module, the dual-camera area this time comes with a matching colour. If you look closely, the cameras are not of the same size and the main unit is expected to come with a f/1.5-f/2.4 variable aperture like the current S9 series. While it retains a horizontal camera placement, the fingerprint sensor is moved below, making it easier to locate without looking. Another option seen here is purple which is likely to be the same Lilac Purple as the Galaxy S9 and S9+. According to Sammobile, Samsung is expected to launch a total of 5 colour options and this will include Black, Grey and Brown. Based on a render shared by @evleaks, it’s possible that Samsung might experiment with a two-tone design where the S Pen will come with a contrasting colour.

The Galaxy Note9 will be unveiled on 9 August 2018. In case you missed here, here’s what to expect from the upcoming device. Stay tuned to us for the latest updates.