Samsung Malaysia has just introduced four new affordable smartphones under its Galaxy A and Galaxy J series. Three of them comes with Samsung’s Super AMOLED Infinity Display and one of them has a 24MP selfie camera, which is the highest on a Samsung smartphone. The most affordable of the lot is the new Samsung Galaxy J4. It comes with a 5.5″ Super AMOLED display that pushes HD 720p (1280×720) resolution. Under the hood, it gets a 1.4GHz Quad-Core (likely Exynos 7570) processor that’s mated to 2GB of RAM and it has 16GB of storage which is expandable up to 256GB extra via microSD. The Galaxy J4 gets a 13MP f/1.9 main camera that can shoot videos in Full HD. There’s also a front-facing 5MP f/2.2 shooter that has its own front LED flashlight. 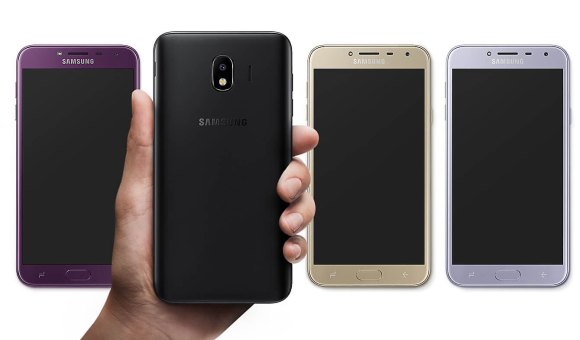 Powering the device is a removable 3,000mAh battery which charges via micro USB. Out of the box, it runs on Android 8.0 Oreo and it has support for dual-messenger which allows you to install two separate accounts of WhatsApp on the same device.

The Galaxy J4 is officially priced at RM599 and it’s available in Black, Purple and Gold. Moving up a notch is the Galaxy J6 which is Samsung’s most affordable smartphone with an Infinity Display. It gets a 5.6″ Super AMOLED screen that pushes HD+ 720p (1480×720) resolution and it is powered by a 1.6GHz Exynos 7870 Octa-Core processor that’s mated to 3GB of RAM. Onboard it comes with 32GB of storage which is expandable via microSD. For imaging, it gets a 13MP main and 8MP front cameras which both comes with f/1.9 aperture lens. Over at the rear, it gets a fingerprint sensor that’s mounted below the main camera. Powering the Galaxy J6 is a non-removable 3,000mAh battery which charges via micro USB.

The Galaxy J6 is priced at RM799 and it also comes in Black, Purple and Gold.

Samsung Galaxy A6 and A6+ If you’re looking for an affordable alternative to the Galaxy A8 and A8+, this could be your next option. The Galaxy A6 is priced at RM1,099 and it also comes with a 5.6″ Super AMOLED Infinity Display that does a lower HD+ 720p (1480×720) resolution. Under the hood, it runs on an Exynos 7870 Octa processor and for Malaysia, it comes with 3GB RAM and 32GB of storage. There’s also microSD expansion up to 256GB. The Galaxy A6 features a 16MP f/1.7 main camera and a front-facing 16MP f/1.9 shooter. In terms of connectivity, it supports 802.11a 5GHz WiFi but there’s no NFC. Keeping the lights on is a 3,000mAh battery which still charges via micro USB. Overall, the specs are quite similar to the Galaxy J6 but you get better cameras and probably better build. Like the first two, it also comes in Black, Blue and Gold. For a larger viewing experience and a bigger battery, there’s also the Galaxy A6+ that’s priced at RM1,399. In front, you get a 6.0″ Super AMOLED display that pushes a higher Full HD+ (2220×1080) resolution. Unlike the smaller brother, the A6+ runs on a 1.8GHz Snapdragon 450 processor that’s mated to 4GB of RAM. Storage capacity remains unchanged at 32GB and you also can expand it further via microSD. In terms of battery, it gets a 3,500mAh capacity battery which is similar to its more expensive Galaxy A8, and it charges via micro USB. Unlike the more premium Galaxy A8 and A8+, the A6 series does not come with IP68 water resistance. Another omission is Samsung Pay since it also lacks support for NFC, however, Samsung has managed to include Always on Display, which is a standard feature on its more premium models. If you purchase these new Galaxy A and J series from now until 31 May, you’ll get 6% off the retail price. On top of that, you’ll also get a free PETRONAS Gift Card worth RM20 bundled with the box. You can check out the full T&C here.

Below is a price recap of all 4 models: