In light of the ongoing trade war between China and the U.S. government, Nikkei recently reported that Apple is looking to move around 15 to 30 percent of its manufacturing operations out of China, with the California-based company asking key partners Foxconn, Pegatron, and Wistron to consider the potential move.

With that in mind, Apple seems to be undergoing a bit of reshuffle, with news surfacing earlier today that chief designer Jony Ive will be leaving the company at the end of 2019. Now, Apple has announced that Sabih Khan will be joining Apple’s executive team as their new senior vice president of Operations.

As part of his new role, Khan will be charged with managing the tech giant’s global supply chain, product quality, and more. The operations team also has a stated focus on accelerating manufacturing innovation, which includes environmental-conscious moves such as the development of new aluminum alloy that enables the use of 100 percent recycled aluminum in MacBook Air and Mac mini enclosures.

Prior to the appointment, Khan had previously worked with Apple’s procurement team since 1995. The new VP has a background in app development engineering, while he also held the position of key account technical leader at GE Plastics.

According to Apple COO Jeff Williams:

“I’ve been privileged to work with Sabih for more than 20 years, and you won’t find a more talented operations executive anywhere on the planet. He is a world-class leader and collaborator, and I have no doubt that he will be the best leader of the Ops team in Apple’s history.”

“He and his entire worldwide team are committed to delivering unmatched experiences to our customers, treating workers everywhere with dignity and respect, and protecting the environment for future generations.” 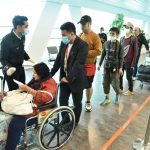