If you’re using an iPhone and don’t want to spend money on a square watch, here’s another alternative. The folks at Samsung has officially confirmed that they are adding iOS support for its current Gear S2 smartwatches.

This follows the earlier rumour however it is happening only later this year without specific dates. Similar with Android Wear powered smartwatches, the Gear S2 is expected to lose some functionality when it’s paired to an iPhone but it should work with your standard day to day notifications. In the past, Samsung has limited its Gear smartwatches exclusively to Galaxy devices but recognising the need to go mass, they have finally opened up the Gear S2 to work with most Android smartphones. The Gear S2 is their first round smartwatch and it stands out with its rotating bezel that we feel is more intuitive to use than the digital crown on the Apple Watch.

The Gear S2 is currently priced at RM1,399 while its Classic version is going for RM1,599. As a comparison, the Apple Watch is priced officially from RM1,599 and that’s for the base aluminium model with a smaller 38mm size. The straps for the Gear S2 are also replaceable and the Classic version lets you swap with any traditional 20mm watch band.

If you’re an Apple iPhone user, would you get an Apple Watch or a Gear S2? You can learn more in our unboxing and hands-on. 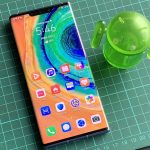