Microsoft today announced KIN, a Windows Phone 7 derivitive based mobile phone that it says is designed specifically for social media addicts. Developed in partnerships with Verizon, Vodafone and Sharp, the new social media phone is designed to be the ultimate social experience that combines mobile phone, online services and PC all in one – sounds like nothing new to us but we would love to get our hands on one of these phones.

Alas, KIN will only available from Verizon in the U.S. beginning in May and from Vodafone in Germany, Italy, Spain and the United Kingdom around the second half of the year. No word yet on release dates for other countries and no official pricing has been revealed.

Check out KIN videos and more after the jump.

There will be two versions of the KIN available at launch. Dubbed the KIN One and KIN Two, the phones will offer entirely new interface that puts social services such as Facebook, Twitter and news feeds at its core.

Both phones feature the standard feature set of any modern smartphone with multitouch touch screens, accelerometer and video recording. The KIN One is small and compact, designed to be very pocketable and easy to operate with one hand. The KIN Two has a larger screen and keyboard, in addition to more memory, a higher resolution camera, and the ability to record high-definition video. The 5 and 8 megapixel cameras in KIN One and KIN Two, respectively, both comes with LED flash.

What makes the KIN different, says Microsoft, is that it automatically backs up all its contents on a password protected website. This idea of storing information in the cloud means users can access their photos, videos, messages and even call history from a browser anywhere and don’t have to just depend on their phone.

Microsoft say the cloud service offers unlimited storage and it will be free. On board memory for KIN One is 4GB and 8GB for KIN Two.

KIN also integrates Microsoft’s Zune digital music service. The phone’s music player has the same interface as the Zune HD. For web search users can only use Bing and nothing else on the device.

Unlike Apple’s iPhone and Google’s Nexus One however, app developers won’t be able to create apps for the KINs. 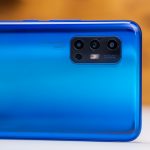